Today, I had Moussaka, a recipe that is my daughter’s favourite. She had tasted it in a Greek restaurant and wanted to try it at home. ‘Moussaka’…isn’t that name a mouthful! I kept repeating it a few time just to annoy my daughter…hehe!  She ignored it and took the initiatives to make it. (Yes, surely an aspiring cook!) She followed Martha Stewart’s recipe but converted it into a vegetarian version. I was just an onlooker, an encouraging mother punctuating her work with do’s and dont’s. It was fun! 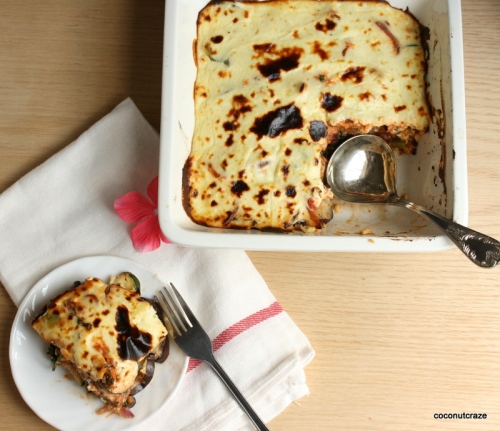 Classic Greek Moussaka is made by layering eggplant, potato and meat with white sauce. Doing some research, I found out this is a mix of Turkish and Balkan style. This eggplant version is different from the traditional preparation with the addition of other vegetables and topped with a simple cheese and egg mixture rather than a sauce. While it can be time consuming to prepare, you would find it a rewarding endeavor when completed.

It is quite easy to execute by following simple steps. This dish is almost like a lasagne with a load of vegetables but without the pasta. You know what it means…extra nutritious!

It needs constant attention when broiling on high because it tends to brown and burn in seconds. Our Moussaka got a bit scorched in places but it did not affect the taste a bit. I told my girl to ignore the colour and savour the rest.

It was baked in a casserole dish and served warm. This baked casserole is wholesome and filling so you don’t need any other dish to accompany it. Moussaka is a complete meal in itself!

It is not a familiar dish in our family but this piping hot dish created great interest. It has the taste of a mix of very familiar flavours approved by our palate. When it was served, no one had time to analyse it…because we were busy devouring it.