Don’t be alarmed. These are not the worm guys from “Men in Black” cooked and served on a plate. They are Enoki mushrooms!

Mushrooms! Don’t they look alluring? I am sure I have expressed my love affair with mushrooms on several instances. Sprouting on decaying materials, they add a certain charm to the cool, shady corners in your garden. Some mushrooms are just beautiful and others, creepy. A toadstool can transport you to a magic kingdom where fairy tales happen. Whereas, a Morel mushroom with slimy spores or a stinkhorn which is smelly, can be repulsive. Many are poisonous as well, but we have a wide array of edible shrooms.

I have tried cooking different kinds of mushrooms and was impressed by the subtle difference in their taste. They can add varying depth of flavour to our dishes. Normally, I buy button mushrooms, and on a whim I tried  shitake, crimini and meaty portobello too. I had not tried enoki so far. I had seen it in boxes on the store shelf but ignored it. There is nothing wrong with it, it’s just, well, a bit of an unfamiliar territory. This time I was ready for some culinary adventure! So I bought some to challenge myself and it sat in the fridge for a week before it could inspire me.

Enoki mushrooms are native to Japan and commonly used in Asian dishes. They have long stems and little, white caps. They look like bean sprouts at first glance, but joined together at the base; they taste very different.

They have a mild almost fruity flavour with a crisp texture. Being crisp, they can be used raw, in salads, sandwiches and as garnishes. Cut the hard base before cooking. As heat hardens and makes them tough, add these delicate mushrooms towards the end of cooking. 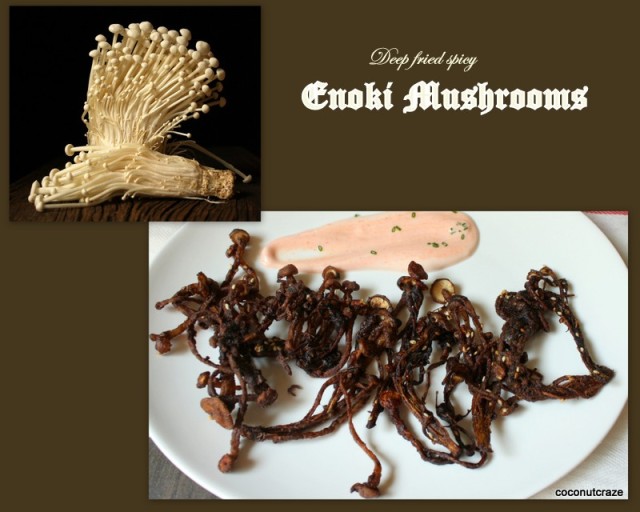 Meat-like and with an earthy flavour, these mushrooms are packed with nutrition. It is used in stir fries and added to soups, but it tastes good when grilled and fried too! I took them to the wok and gave them a good deep fry!

To make the sauce: Take yogurt in a bowl and mix chilli sauce, lemon juice and salt. Sprinkle chopped chives on it. Use this as a dip for fried mushrooms. 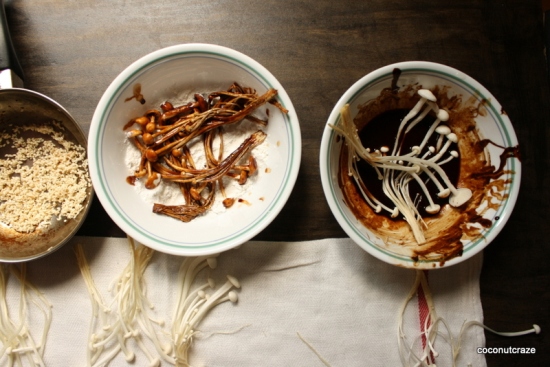 Do not leave the mushrooms for a long time in the sauce mix as it will get soggy. Keep bowls with sauce mix, flour mix and sesame seeds like in a breading station. Dip the mushroom in the sauce, then in the flour and immediately drop into hot oil. Drop them in small bunches spreads out to let the steam go! Do not crowd them as they will start sweating and will not crisp up.

This spicy Enoki mushroom fries were received with great enthusiasm at home…after all it is a fried dish!

It tastes salty, spicy and sweet. When fried in small bunches, they becomes very crispy. These look like some aliens or skinny creatures wearing hats. Okay, it has stirred enough conversation at home. It surely looks very abstract to draw more ideas!

A plate of this is a lovely snack with tea. These can be served as a savory side with barbequed meat and attractive enough to be an appetizer for vegetarians.