I don’t know if it is a cultural thing or a motherly thing that I always ask my children what they ate if they did not have home made lunch. When I ask my son, invariably he says, “FOOD”! But I still prod with questions to get all the details. While talking to friends, I include the inevitable question what their culinary experiment was and most friends ask me in return. I have seen my mother discuss with our neighbours about the food they cooked. Maybe it is to draw inspiration or cook a copycat version of it. It always helps!

Recently, I was on a phone chat with a friend and asked her what she made for lunch. She mentioned making beetroot rice. She also packed it for her son’s lunch as he likes to deal with something that can be spooned easily. I thought it was a cool idea. So I tried the same but spiced it up with tikka masala to add some oomph to it.

Beet root is a great colouring agent that overpowers and colours everything added to it and makes this rice look attractive. I made this pulav mainly for visual delight but slyly for all the hidden benefits. I added broccoli at the end of the preparation to add a little contrast. My dear son who considers rice as empty calories and doesn’t get charmed by beets commented, ‘It tastes pretty good!’. Wow, that was a big stamp of approval! So I decided to post it. 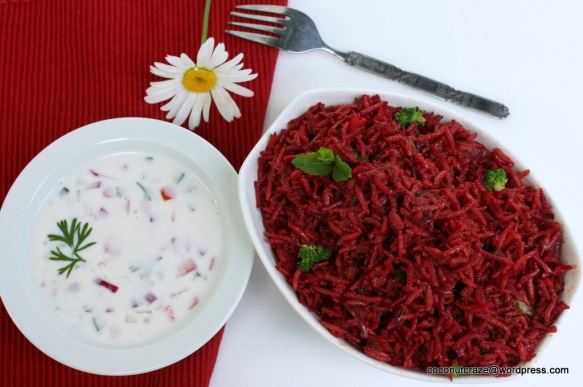 Mix all these ingredients and store it in a jar and use as needed.

A combination of theses spices make the pulav stand out by adding extra flavour. Tikka masala infuses an additional aromatic punch and turns ordinary rice into a special meal. I have plans to use it in other fried rice dishes too. This spice mix can be used in recipes like  Chicken tikka masala, Butter chicken and mixed vegetable curries.